Photoshop manipulation to the extreme

In a short while, Photoshop will introduce a new feature: a way to copy the visual aesthetics from one photo to another. 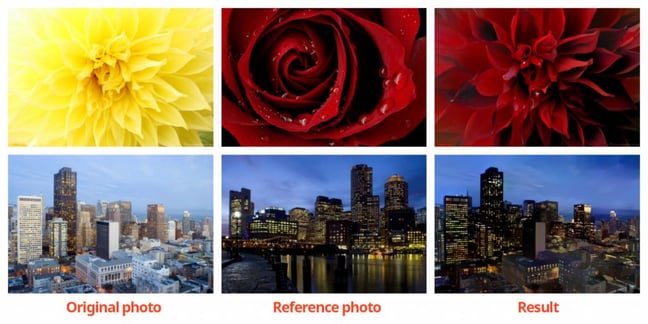 It will become one of the coolest developments in image manipulation technology: the possibility of applying the visual aesthetics of one photo to a different shot. It looks like Prisma, the app that applies photorealistic artwork filters on photos.

Google and Facebook have built on similar technologies, but instead of drawing and painting digitally, this Photoshop project is aimed at the colours and lighting of a reference image. Here are some examples:

It means that after manipulation, a photo of a city on a sunny morning will look like as if it was taken at dusk, just by using an evening shot with the desired weather conditions as a reference. The result hasn’t changed the lines or forms.

Most impressive about the algorithm is that it can create intelligent details, such as adding light to the window of a skyscraper. It’s as if a human photo editor is imitating a reference image.

To achieve this, the developers of Photoshop used complicated methods to register the lighting and colour curves of the reference image. They also developed a way to limit the transformation, so the changes would be applied on the result photo in a natural way, without colouring outside the lines. Artificial intelligence, where does it stop?

05/10/2018 in Leoprinting, Marketing, News
When logos were made of real lions Voice of the customer for 'Dummies'