When logos were made of real lions

Before the digital area, almost anything graphical was designed trough a physical process. In the film and television industry, a lot of logos were also physically produced in order to film them. Some television stations and film studios went even further and designed three-dimensional physical logos to create special effects. The most famous example probably being the MGM logo: Leo the Lion, who first appeared in 1916.

Leo the Lion is the mascot for the Hollywood film studio Metro-Goldwyn-Mayer and one of his predecessors, Goldwyn Pictures. During the last decades, seven different lions were used. Only the seventh lion was called Leo. Leo has been used the longest by MGM and appeared in most of their movies since 1957. He was born in Royal Burgers Zoo in Arnhem. In the 60s, the zoo was globally known for their lion breeding program. Leo was also the youngest when MGM filmed him to star in their logo (hence his shorter manes).

To raise publicity for their movie productions, the lion was flown around the United States in 1927 as ‘Leo, the MGM Flying Lion’. An airplane was equipped with water tanks, extra fuel and a cage, especially for Leo. 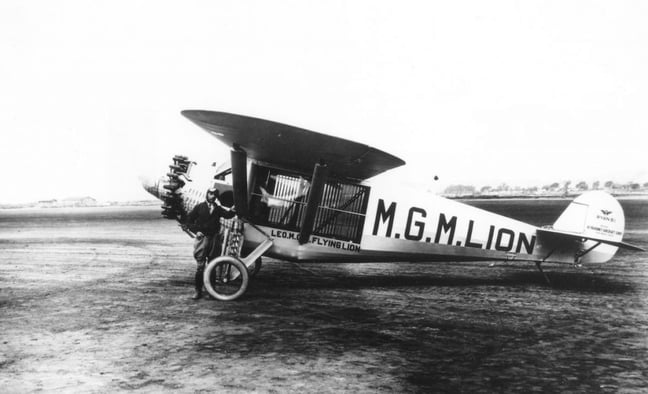 Customised airplane for the MGM lion

The lion even survived a plane crash. The airplane crashed in the Arizona desert during a five hour flight of San Diego to New York. Fortunately, the passengers survived the crash. Before looking for help, Pilot Martin Jensen locked the lion into the cage with some milk, water and bread. After four days, Martin was found. He called MGM and their first question was: how is the lion doing?

Crashed MGM plane with the lion still in it

In 1965, a restyled logo was designed for MGM. It was used for only three movies, after which they reached back to the old logo. Quite fascinating that a now hundred-year-old logo has stood the test of time.