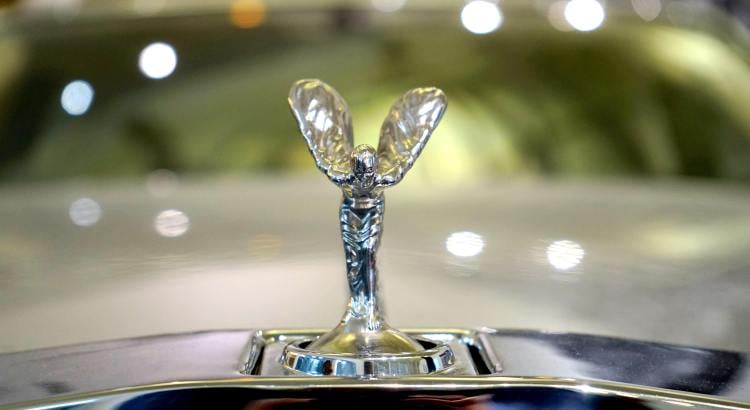 The origin of The Spirit of Ecstasy, the famous figurine on the bonnet of a Rolls Royce, is a story that can be taken from the gossip columns of London's high society. It's about wealthy aristocrats, mini-lessons and hidden adventures.

The Spirit of Ecstasy is the jewel on the bonnet of the Rolls Royce car. It is a sculpture of a woman leaning forward with her arms stretched, a wavy cape behind and above her that runs from her arms to her back and resembles wings. It has become an iconic symbol of luxury and elegance.

It was a British conservative politician and promoter of motoring Lord Montagu, who had the first bonnet decoration on a Rolls Royce. His full title is John Walter Edward Douglas-Scott-Montagu, 2nd Baron Montagu of Beaulieu. But let's stay with Lord Montagu to keep it easy. For the sculpture he approached his friend, the sculptor Charles Robinson Sykes, a graduate of the Royal College of Art, who developed a figurine especially for him of a woman standing on one foot, with a fluttering cape, holding a finger against her lips as if she kept a secret.

The model for the figure was an English model and actress: Eleanor Velasco Thornton. Thornton was 22 years old when she became the secretary of Montagu. They also had a secret relationship for more than ten years. The low social status of Thornton was a hindrance to a marriage. Meanwhile Montagu married Cecil Victoria Constance, but the secret love affair with Thornton was continued.

Only a few casts of the sculpture were made and only a few of them were preserved. The statue made by Sykes was called, intriguing, The Whisper ...

When Claude Johnson, managing director of Rolls Royce, had seen the statue, he asked Sykes to design an elegant piece of art for Rolls Royce to decorate all future Rolls-Royce cars. His assignment was to convey the spirit of Rolls Royce, namely: speed with silence, the absence of vibrations, enormous energy, represented by. a sculpture of a beautiful woman with extraordinary grace.

A few centuries ago they decorated ships with figureheads, especially the old wooden sailing ships of yesteryear. This tradition returns in a sculpture on the bonnet of luxury cars so that this "figurehead" gives a perfect finish, an example of artistic skill, prestige and above all an unmistakable identity.
Johnson first thought of the statue 'Winged Victory of Samothrace' in the Louvre. Winged Victory (or Nike) is the goddess of power, speed and victory and is often seen with wings.

Sykes wanted a much more feminine, softer appearance and he used Thornton's first sculpture as his inspiration for the second, with an even lascivious cape that jumped backwards like her 'wings'. Like 'Winged Victory' she looks in the wind, with a feeling of movement and triumph. The sculpture has had eleven incarnations, names and sizes, from 'The Whisper' to 'The Spirit of Speed', to the current name 'Spirit of Ecstasy' and is generally known as Emily, Silver Lady and Flying Lady. Kneeling versions were introduced for smaller sports cars. Because so many sculptures of the Rolls Royce’s were stolen, the current version has an interesting defence mechanism. If someone puts some pressure on the ornament, the car recognizes what is happening and immediately pulls the figure back into the bonnet.

Originally the sculpture was silver-plated, after 1914 it was produced in a nickel or chrome alloy to discourage theft. The sculptures are still cast by hand. If you want to order a Rolls Royce now, you can order Spirit of Ecstasy in stainless steel, 24-carat gold, illuminated frosted glass, or matte black and studded with diamonds. The love story behind 'The Whisper' ended abruptly. Eleanor died on 30 December 1915 when the steamship SS Persia near Crete, without any warning, was torpedoed by a German submarine. Eleanor accompanied Lord Montagu to India. It was thought that Montagu had also died, but he was rescued after a few days, clinging to an inverted life raft. The Spirit of Ecstasy is the jewel on the bonnet of the Rolls Royce car. The story behind it was a big secret that can come out of the gossip 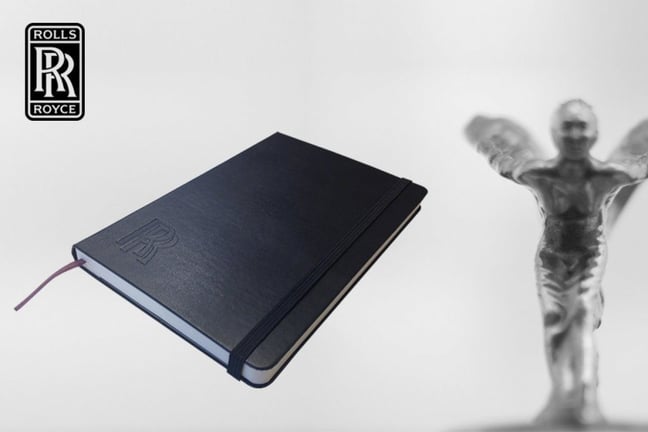 Leoprinting has been chosen to make a notebook for Rolls-Royce, we are proud of that!

02/11/2018 in Leoprinting, Marketing, News, Products
Posters, art of the street The role of the Mascot in Advertising