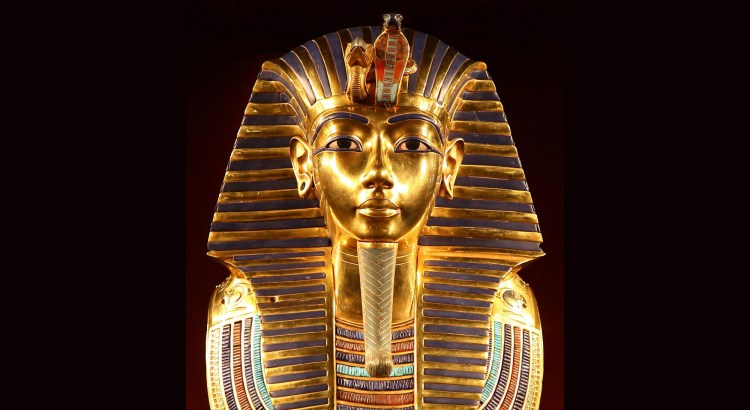 The discovery of the tomb of Tutankhamun by Howard Carter in 1922 certainly was one of the most spectacular events of the 20st century. ‘King Tut’ immediately became the most famous Egyptian ever, even though he succeeded his father as pharaoh at the age of nine and died at nineteen.

Discovering the tomb in the Valley of the Kings was breaking news all over the world. In the pre-television area it could only be covered in printed media and in cinemas. Newspapers brought stories about the discovery on a daily basis. Black and white film images and pictures published in papers were the only possibility of informing people.

It might have been the reason a huge Egyptian hype started and the tomb influenced all aspects of art and design in the 20s. How else would it be possible for people to visualize this spectacular discovery? In 1924 the Parisian Folies Bergère showed a spectacle that left nothing to the imagination: ‘Legends of the Nile’. Ostrich feathers were used in a way they were not intended to be used. Ancient Egypt also influenced fashion. Ladies wore Cleopatra earrings and a headband. Perfume was sold in obelisk shaped bottles. Hieroglyphs were being used as decoration. The discovery made an impression on interior design too. Tables and chairs were shaped like the tomb Tutankhamun was found in. Even Lenin was embalmed and mummified.

Carter indignantly turned down a proposal of a New York fashion brand to exclusively buy the rights of the name Toet-Anch-Amon. The Egyptian sense of style wasn’t only for rich people. It became a hype for common people as well. Pieces of Egyptian soap in small sarcophagi were produced. In America, lemons of the brand King Tut were sold.

Carnarvon, an English aristocrat and financer of the discovery, died three weeks after the official entering of the tomb because of a mosquito bite. It created suspense: the curse of the pharaoh for people disturbing the grave. A splendid theme for Hollywood mummy movies and Tintin’s ‘The cigars of the pharaoh’ adventure of 1932. The hype even left its mark in the graphical industry. There’s a font called Egyptienne: a classic, heavy serif font. History teaches us you don’t need internet to go viral!